To my friends who are alums of William and Mary, you have a College President you can be proud of. 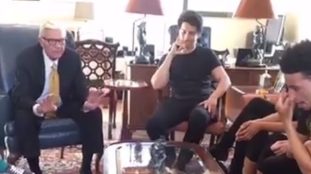 Black Lives Matter students at the College brought a list of demands to President W. Taylor Reveley III during a livestream meeting on Wednesday.   In a world where radical campus activists are genuflected to with regularity, despite their obsequiousness of their concerns, the little SJWs in attendance here were likely unprepared for what happened next.

The silver-haired Reveley told them:

“I don’t deal in demands.  I don’t make demands of other people. I don’t expect to receive demands from people. I love to get suggestions, recommendations, strong arguments. … When you approach other people with a demand, instead of their ears opening and their spirit being unusually receptive, you get defensive walls erected. So I think you all need to think about it.”

Hot-diggety DAMN!  *That* is how you handle spoiled brats who think their melanin content or their genitalia makes them uniquely qualified to tell other people what to do.   The look on some of these students faces was priceless when they heard these words—quite possibly for the first time in their lives.  They haven’t been this stunned since their local Starbucks ran out of Caramel Macchiato.

One highly-presumptive student told the President that people see “suggestions” as things that were not important.  They quickly got another free lesson from the President.

“No, no, no, that’s not the way the world works. It is not effective, in my opinion, to approach other people and say ‘we demand’ unless you have the capacity to demand.”

That free kernel of wisdom will do that young student more good than the hours of tripe they have likely memorized from their Gender Studies class.  He should have written the President a check.

But it got even better.  In a statement that thoroughly summarizes the mindset of campus student liberals, one said “We are students, and we pay tuition to be here. “That is the reason why we are able to write these demands.”

That snot-nosed student belongs to a group called “Built on Our Backs.”  It is a reference to the fact that the school was (ostensibly) built by him and people like him.  Interesting.  William and Mary was established in 1693.  I don’t know this student’s age, but I am pegging it as something less than 300.  Shut up, cretin.  And as for your foolish assertion that paying tuition entitles you to make demands…I have some BAD news for you.  The University can find other students.  I assure you.  And I strongly suspect they would rather have those other students than they would you.  Put in an app at Cal-Berkley.

In a statement that encapsulates pretty much everything about the modern-day Progressive movement on campus; one useless little snowflake wrote on her Facebook page:

No sweetheart.  You do NOT know what censorship looks like.  Nor any of the other things.  You just got your candy ass handed to you by someone who happens to be a white male.  You now know what THAT looks like.

I sincerely hope these students were listening to the President.  He gave them some of the best advice they’re probably ever going to hear in their lives.  Your race, gender, religion, sexual orientation and political persuasion doesn’t give you Super-Powers you can then wield to make demands of others.  You have been living in a world that makes you think such nonsense is reality.  It is not.  And the Good President has given you some free instruction on how to disabuse you of that poisonous notion once you leave the hallowed halls of academia.

Do you think I’m kidding?  Ten years from now, I hope some of these students storm into their boss’ office at work, demanding he or she make special concessions because the worker is a member of a “protected class.”  I would pay money to see that.

And to those of us burdened by common sense who have steadily scratched off colleges as more of this Social Justice Warrior inanity has been revealed, you can proudly keep William and Mary ON the list.

Like Loading...
By chuckscommonsense in Uncategorized on March 31, 2017.
← Pence Family Values Stump the Left When the “Legend” trumps the facts →