In their Sunday edition yesterday, the Washington Post devoted an entire page showing the name of EVERY victim of mass shootings in the United States over the past 50 years.  I’m sure it was meant to be a powerful and thought-provoking image.  But the thoughts it provoked in me were probably NOT the ones the Post’s Editorial Staff intended. 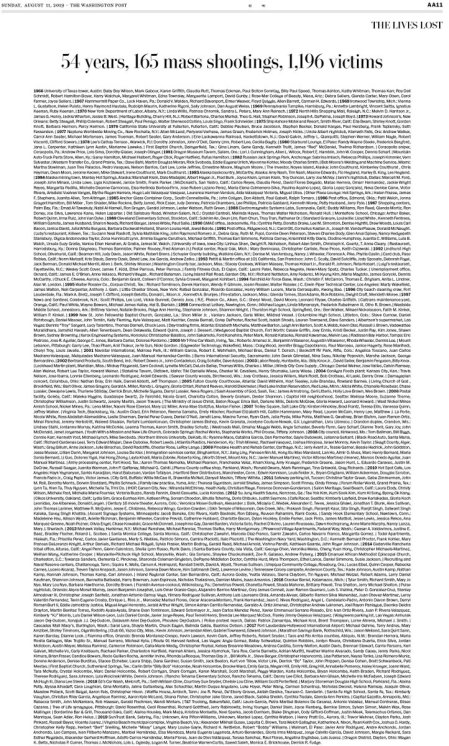 Since 1966 there have been 165 mass shootings in the United States with 1196 victims.  Employing simple math (we’re still allowed to do that, right?) shows that 22 people a year are killed in mass shootings in a country of more than 300 million people.

This is what one of my PoliSci professors at Virginia Tech called, “virulent innumeracy.”  That is to say, trying to take something that is exceedingly rare and make it appear MUCH more common by presenting it in an emotionally-charged manner.  The goal, of course, being to use the emotional impetus from those presentations of facts to spur major policy changes.

How rare are fatal mass shooting victims?  Well, consider that 700,000 people have died in the US since the AIDS epidemic began.  That comes out to more than 25K annually.   Last year alone, 70-thousand people died of opioid abuse.  According to the National Weather Service, the number of fatal lightning strikes in the US each eclipsed 25 in all but two years over the past decade.

If you want a political spin, consider partial-birth abortions—the procedure that abortion supporters assure us is as rare as an oyster in the desert.  There are 10,000-12,000 such abortions every year.  That is 700% greater than the number of mass shooting victims.

It goes without saying that any senseless death is tragic and we should always endeavor to do better.  But that effort should also reflect the severity of the problem.  No one feels compelled to reduce the national speed limit to 20 MPH in order to cut into the number of highway automobile deaths.  There is a reason for that.

And when the proposed solutions to an issue begin inching into Constitutional territory, the “problem” we’re addressing had best be on the level of the Bubonic Plague.  If you are going to talk about taking away gun rights, at least acknowledge you are messing with a constitutional right on par with freedom of religion, voting, free speech, privacy. And then treat that with the gravity it deserves.

In a nation full of *thinkers,* this effort at emotional blackmail by the Washington Post would fall flat.  People would run the numbers and see that mass shootings are comparatively quite rare.  Sure, there would be concern over the recent upward trend, and a willingness to explore reasons why that is the case.  But people would also see that since these are such rare occurrences, chipping away at basic Constitutional rights as a response would be (pardon the pun) overkill.

Unfortunately, we are NOT a nation of thinkers.  We have been conditioned to be a nation of *feelers.*  As such, this effort will join many other emotional appeals being pushed by politicians and pop culture to make people more open to the idea that mass shootings are as common as bad traffic…and drastic action is needed…NOW.

Like Loading...
By chuckscommonsense in Uncategorized on August 12, 2019.
← Democratic Presidential hopefuls “make a killing.” Throwing Granny under the bus to “own the Jews.” →