Home » Uncategorized » You just couldn’t do it, could you Republicans?

You just couldn’t do it, could you Republicans?

By the margin of the hair on their chinny-chin-chin, House Republicans today passed the American Health Care Act. They had just one vote to spare; 20 Republicans voted no, along with every Democrat. The bill now goes to the Senate where changes are certain. But that didn’t stop the President and GOP leaders from enjoying a quick victory lap afterwards in the Rose Garden. (pictured)

Donald Trump was elected on a promise of repealing and replacing Obamacare…as were a sizable number of new Republican Congressman and Women.  Well, I guess they got the “replace” part.  The AHCA leaves much of the core structure of Obamacare intact.  It gives it a new shiny package festooned with elephants rather than donkeys; but the idea is still to have much of the health insurance industry beholden to federal regulators and lawmakers.

It replaces Obamacare’s insurance subsidies for lower income individuals with new subsidies, disbursed through the tax system, for individuals purchasing coverage on the individual market. The new subsidies would range from $2,000 to $4,000, and would increase with an individual’s age.  In order words, the Federal Government is still determining winners and losers.

As with Obamacare, those with pre-existing conditions must be covered, adult children can stay on their parents’ plans through age 26, coverage plans must comply with Obamacare’s categories of “essential health benefits” and consumers with pre-existing conditions cannot be charged more than others.  Never mind that all of these functionally fall under the category of “unfunded mandates.”

But wait…states are now eligible to apply for waivers from some of the EHB’s and “community rating” restrictions.  But the end result…the Federal Government is STILL calling the shots.  They will decide if the states can get those waivers.

Under AHCA, Obamacare’s Medicaid expansion would be converted into a system of per capita block grants starting in 2020.  Translation…the Federal Government STILL calls the shots.

It is unlikely this version of bill will ever become law.  But it allows Republicans to claim that they have voted to repeal and replace Obamacare.  They managed to go straight from the Capitol to the Rose Garden minutes later for a ceremony with President Trump to crow about how they had finally slain the Obamacare dragon.  They metaphorically spiked some footballs and danced in the end zone. Hey…they scored political points.  That’s what it’s all about these days, right?

Republicans have had more than 25-hundred days to come up with a way to evaporate this paean to the power of government.  But like Frodo standing over the fires of Morder, they struggled to toss the ring into the lava.  “I could use the power of this ring for GOOD!,” they say.  (see picture below)  Yup…that’s what’s they all say.  That’s why we libertarians try our damnedest to make sure no one is thus tempted.

And when it fails, it will allow Democrats a chance to say “look, the Free Market doesn’t work” for health care—even though this is NOT free market.

In the meantime, when it comes to Health Care, the road still goes through Washington D.C. And that is the LAST thing freedom-lovers should want.  “Slightly less repugnant” is still repugnant. 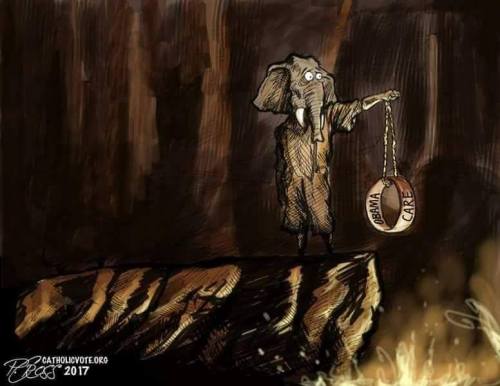