Home » Uncategorized » The Russians Did It!!!

The Russians Did It!!! 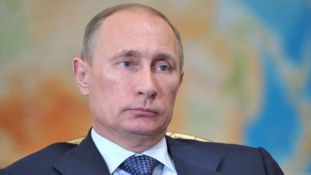 I’m not sure if this means the left has given up on its attempt to blame “Fake News” for Donald Trump’s surprise electoral victory last month, but it seems as if they have targeted a new boogeyman to blame for Hillary Clinton’s defeat at the polls.   Of course, they ARE trying to tie to two together.  You see…it wasn’t former Obama voters in rust belt states that turned the tide.  No.  In a headline straight out of Back to the Future, “The Russians Did It!”

Last week, President Obama ordered an investigation into possible Russian influence in this year’s Presidential election.  The working hypothesis is that Russian hackers either got direct access to the voting machines to switch the votes for Trump; or they managed to propagate the dissemination of the aforementioned “Fake News” to sway voters to turn against Hillary.

In order to believe this one has to suspend a LOT of common sense.  Somehow, the Rooskies had to infiltrate even paper voting systems that are not connected to the internet.  They would also have had to influence an untold thousands of elections officials from sea-to-shining-sea to get the results they desired.   When Trump brought up his ridiculous notion that the election was rigged, Democrats correctly pointed out that such a thing was impossible; given the de-centralized nature of the Presidential Election.

Ah, but what about that “Fake News?”  Well, for those stories to have had any impact with voters, they had to contain at least a kernel of truth.  “Hillary Gives Birth to Alien Twins” is probably not going to do the trick.  But stories highlighting her curious e-mail practices while serving as Secretary of State might work.  Or, coordinating the release of hacked e-mails from Democratic officials.  In each case you will note that the validity of the information is not in question.  Yes, Hillary DID set up her own personal server through which classified information flowed.  Yes, she DID run a play-for-pay scheme and sold influence through the Clinton Foundation.  Indeed, DNC officials worked actively to undermine Bernie Sanders’ Presidential bid.

Another crucial element in all this was Clinton’s built-in unpopularity—even among Democrats.  Had she been a popular candidate with across-the-aisle appeal, none of this would have mattered. Apparently, those darned Russians have been working for more than 20 years to help make Hillary unpopular!  Damn, they’re good!

Had none of these things happened, any “Fake News” stories based on such things would have had the same impact as the Alien Twins headline I just mentioned.  They would have been ignored.  But she did it.  They did it.  And they paid the price.  Again, the blame rests squarely with Hillary Rodham Clinton and her minions…not with shadowy hackers in Moscow.

Now let’s take a gigantic leap and assume this is true.  What then?  Certainly we’re not going to invalidate the results of the election.  No, the Democrats will attempt to do what they tried to do to President Bush in 2000—undermine his legitimacy.  Much like they claimed that Bush was picked by the Supreme Court and not the American people, they will claim that Trump was picked by the Russians.  You will remember also that Bush won easily in 2004.